A resident of Nashville, Tennessee since 1985, SESAC recently made the decision to consolidate its offices under one roof while remaining close to its roots on Music Row. According to the Chairman and CEO, John Josephson, the space will be home to the organization for many years to come. Though the smallest of the three major performing rights organizations in the United States, SESAC’s catalog of licenses is anything but small – it includes Bob Dylan, Neil Diamond, Green Day and Adele, to name a few.

It was necessary for the new headquarters to showcase its catalog of famous artists, reinforce creativity, encourage collaboration, and reflect the company’s culture and brand. The two-story space was designed as a multi-purpose facility. Nashville based architecture firm, Tuck-Hinton Architects designed the office with a variety of work environments enveloping a grand staircase, strategically placed in the center of the office, doubling as a performance area.

Scott Johnson, Design Principal at Brilliant Lighting Studio in Culver City, California, part of Wolcott Architecture, was enlisted to develop a flexible, energy-efficient lighting plan to meet the $9 per-square-foot budget, while conveying the company’s aesthetic. As a California based lighting designer, Johnson is well educated in designing for energy efficiency. However, LED solutions and California energy codes, such as Title 24, were relatively new to the project’s stakeholders. “We had to sell them on using a certain amount of LED in their fixtures,” recalls Johnson. “When this project was started three or four years ago, LEDs were still novel and the cost of LEDs was more expensive than fluorescent for basically the same fixtures, and there was a certain budget that drove the project.” 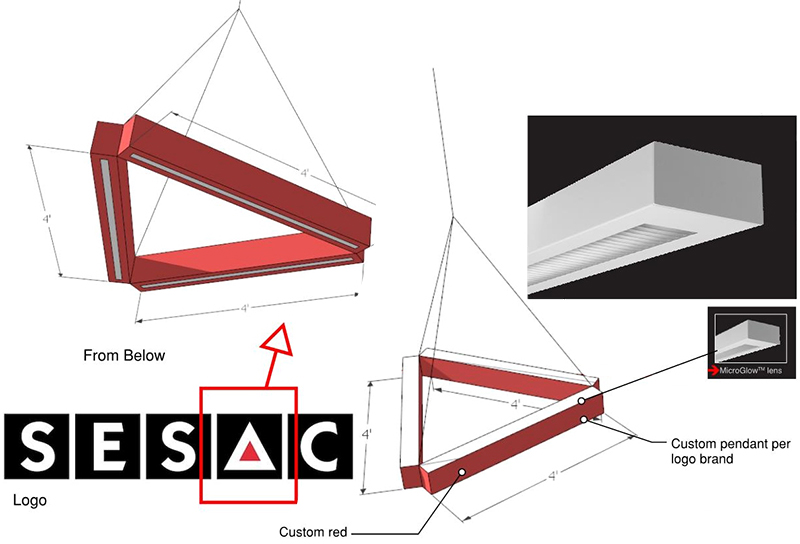 Johnson knew applying the standards was only possible by using energy-efficient luminaires and controls, which would address the diverse needs of the space – enabling the transformation from office to event center at any moment. Like the rhythm of a song, the lighting plan included a composition of luminaires. Johnson explains, “it was a musical looking ceiling plan, it had all kinds of rhythmic juxtaposition between repeating elements and other elements dropped in somewhat randomly.” Luminaires in various shapes, sizes, and mounting styles, as individual units and clusters, work together in harmony while also carrying a subtle nod to keyboards and music notes.

Continuing to draw inspiration from the organization and with a desire to play off SESAC’s brand identity, Johnson designed custom triangular-shaped suspended luminaires, evocative of the distinct A in SESAC’s logo, with a custom finish to match the company’s signature red color. “Since we were already working with Focal Point and I liked the Dart fixture, I thought, well maybe they can do that. I made a sketch, sent it off to my local representative, SCI Lighting Solutions, then Focal Point picked up the ball and ran with it,” stated Johnson.

“This was the first time for me doing a custom fixture with Focal Point. There were many more details than I would have thought about how to put three Dart fixtures together to create a triangle, but at the end of day, Focal Point wrestled the details to the floor. That is why it all worked out, without a ton of back-and-forth, they took my sketch and made it real.” - Scott Johnson 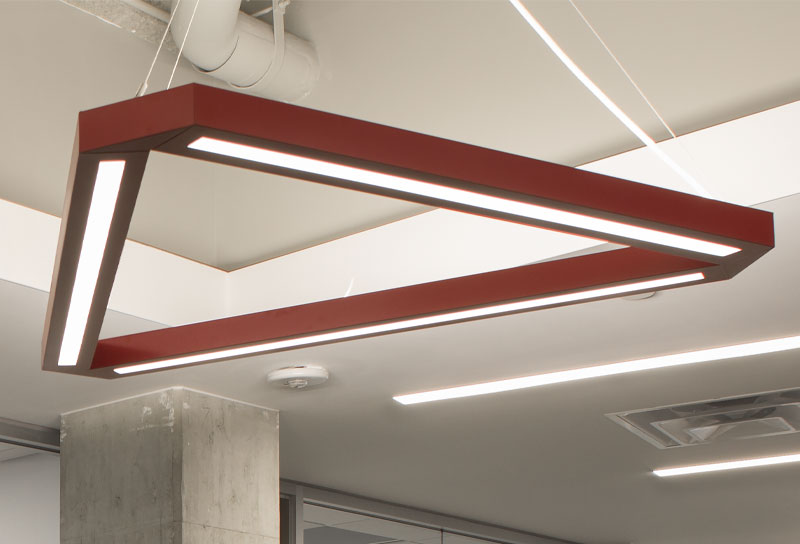 The attention to detail and seamless communication by the Focal Point Custom Revenue Engineering (CRE) team resulted in a direct/indirect pendant fabricated using stock components of Dart suspended luminaires. “This allowed a personalized look without the painful cost and time commitment of a fully custom luminaire,” stated Johnson. The luminaires were strategically placed in the two-story atrium and in gathering areas to provide a common feature, visually joining formal and informal areas. Standard Amica 2x2 LED and Skydome LED luminaires from Focal Point were also included in the space.

In the end, the new space was designed for the future with LED luminaires and a lighting control system, to yield an LPD of 1.1 watts per-square-foot, reducing costs and easing maintenance needs. Like a musical composition, the design emphasizes counterpoint and harmony, earning a 2017 IES Illumination Award of Merit and delivering a flexible space to keep the music alive.