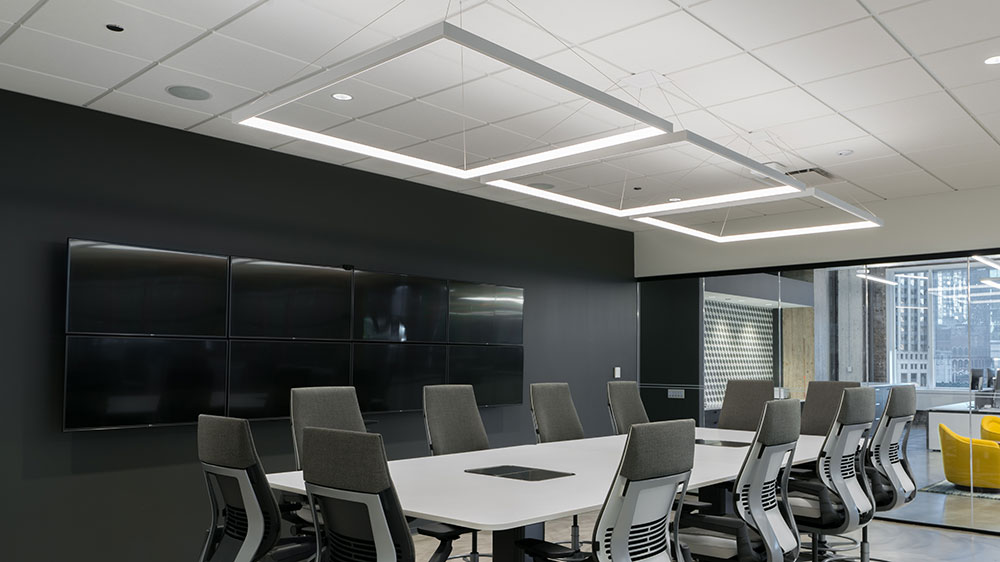 Endeavoring to consolidate its inventory of small offices spread across downtown Chicago, Kellogg Co., relocated employees to a new space in one of Chicago’s most iconic buildings, the Merchandise Mart. Since opening in 1930, the Merchandise Mart, centrally located in the heart of the city, has represented the epitome of wholesaling. Built by Marshall Fields to consolidate its warehousing operations, it was owned by the Kennedy family for over 50 years, and is now home to high-end showrooms. In recent history, it has attracted architectural and interior design vendors, tech start-ups, and more. It is befitting that one of America’s best-known brand names, with a history dating back to the very early 1900s, would host fifty global growth and information technology focused employees in this at once historical and modern environment. The maker of popular breakfast foods such as Fruit Loops and Frosted Flakes cereals, and Pop Tarts joined a long list of leading brands residing in the historic art deco style structure. The office renovation was the collaborative creation of The Architect’s Partnership, Ltd. (TAP) and Kellogg’s Chief Growth Officer.

Following its motto “Working Together for Solutions that Work”, TAP listened to the needs of the client to create a modern yet functional office that preserved the buildings’ historic integrity and embraced the local community. Supporting the Chicago community through locally sourced materials would become undoubtedly a valuable decision. “The client was heavily involved in all details of the space, from layout to hand selecting furnishings and décor” stated Natalie McElligott, Associate Architect at TAP. “It was clear the client had a vision for the space: a clean, white, and modern style,” added McElligott. 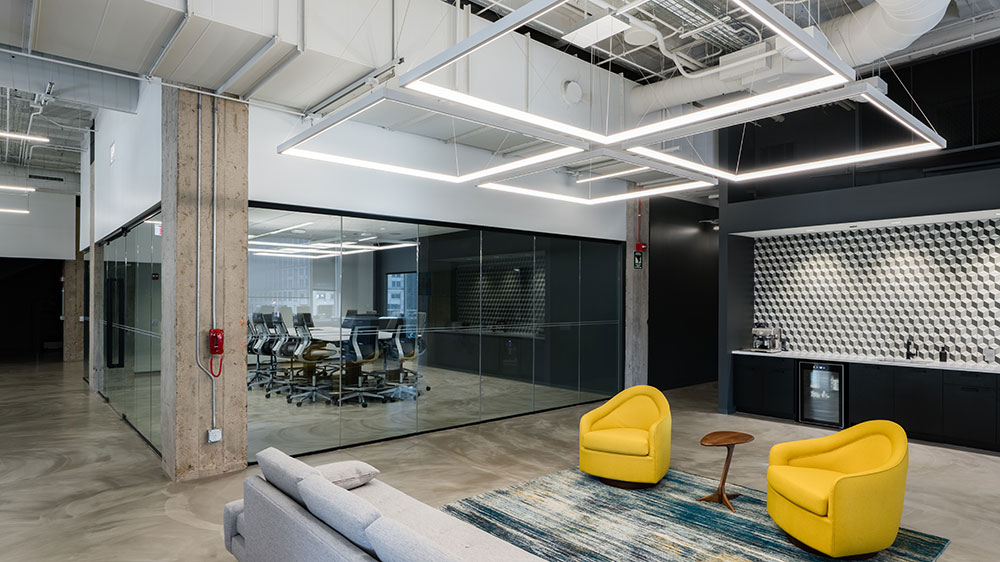 Over the course of 8-months, the space underwent a complete transformation. “It was a difficult project from a build-out standpoint, there were a lot of logistics because we were working on the floor above a high-end kitchen and bath showroom” stated Eugene Mason III, Superintendent at Power Construction, the general contractor for the project. Previously occupied by a radio station, the second-floor space contained a black painted ceiling and walls, creating a dark and enclosed environment. The dark ceiling was removed and the open ceiling painted white to brighten and open up the space. Drywall was removed, revealing the original brick walls and exposing the building’s natural character. To further contribute to the open, modern, and transparent feel while also providing a sound barrier for private conversations, glass walls were used for conference rooms.

As the project took shape, the experienced designers of TAP took note of the monochromatic palette being formed by the natural and industrial elements. To offset the sterile feel, yet maintain the simple aesthetic, communal seating areas were created with bold colored vintage and custom furniture. The bright colors create visual interest and can be seen from most areas of the open office. Lighting needed to support these multi-use areas while blending harmoniously into the architectural surroundings and elevating the modern aesthetic.

“We knew we needed to make a statement with the lighting,” recalls McElligott. “The client wanted a clean, modern luminaire, so we first showed him the Nera pendant from Chicago-based Focal Point, and he agreed the simple form was perfect for the aesthetic of the space. He also appreciated that the product was locally manufactured. We could have used other luminaires, but selected a combination of Nera linear suspended and square pendants for a cohesive look.” 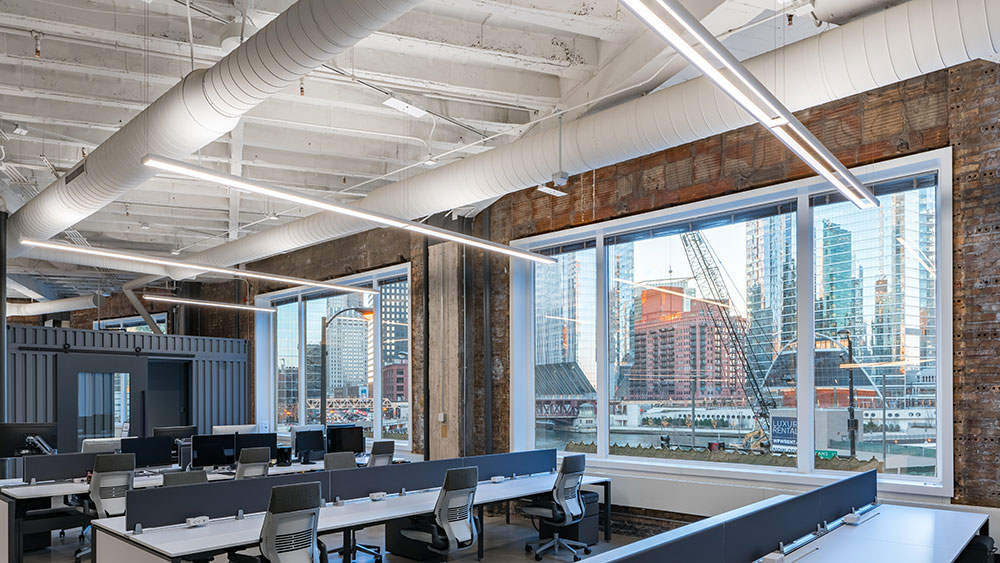 Individual Nera linear luminaires were suspended over workstations; the angular optic lens and 60 indirect / 40 direct distribution providing uniformity on the ceiling and work plane. Clustering four 4ft x 4ft Nera pendants was an innovative way to play with the simple form while creating a statement piece: an oversized chandelier suspended over the collaboration spaces, that helps define the area while providing general illumination. A combination of continuous rows and square pendant Nera luminaires grace the boardroom, conference rooms, meeting spaces and hallways for a uniform look. Selecting Nera also procured the project team with a short lead time and easy access to customer assistance, all while supporting the local economy.

As with many tenant buildout projects, tight deadlines intensified the need for seamless coordination with multiple vendors. During the buildout, ductwork was installed too close to the linear runs of Nera luminaires, interfering with the indirect illumination. Two luminaires were already installed when the issue arose however, the fast reaction of the Focal Point Field Service team allowed the project to continue without disruption to the schedule. “Focal Point’s Field Service team addressed the issue quickly, they were in and out with ease,” mentioned Mason, a 20-year veteran of the industry.

Despite the unique constraints posed by transforming a space in one of Chicago’s iconic buildings, home to high-end showrooms, and a very tight schedule, the project turned out to be a success. The office fuses modern and classic elements, resulting in a functional statement, and garnering praises from Kellogg. “I received direct communication from the client on how pleased they were with the overall project. I myself thought it was beautiful, the flooring and lighting were really the showpieces of the space,” stated Mason.