At only eight years old, Coupang is considered one of the most successful start-ups in South Korea and the largest online retailer in the country. The e-commerce company is gaining traction across the globe, now with offices located around the world, including one in Washington state. The expansive, multi-floor office is situated in the heart of downtown Seattle, near several restaurants and tourist attractions. Its premier placement also means the building is surrounded by towering skyscrapers, limiting the quantity of natural light that permeates the space.

On a mission to revolutionize the online retail landscape and transform the customer experience, Coupang required an office that promotes collaboration. Overcoming the existing dark environment with low light levels and deep hues to create a bright, yet comfortable space was a challenge that the design team off Kerri Snook and Mayumi Yoshizawa at JPC Architects set out to tackle, in addition to creating an open, welcoming, and engaging environment.

“The overarching goal of the project was to ultimately provide the client with a well-lit environment that would meet the needs of each type of area in the office,” explained Mayumi Yoshizawa, Interior Designer for JPC Architects and designer on the project.

With lighting being the main challenge in the space, JPC contacted Melissa Miller, Specification Sales Representative for PLS to assist in the lighting design process. As an industry veteran who specializes in corporate interiors, Miller acted as an extension of the design team, engraining herself into the project. The JPC design team worked closely with Miller, keeping her well informed of the client’s requests which drove elements of the design, such as the material finishes and the color palette. 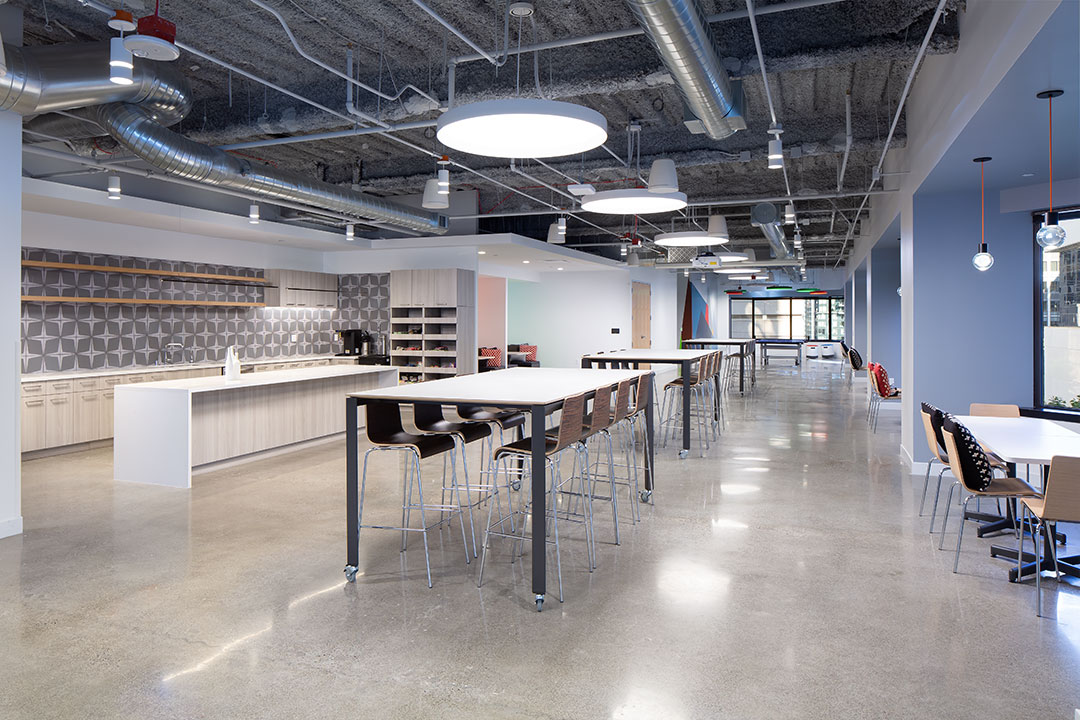 “The client wanted this office to reflect the vibe of the Pacific Northwest, with a simplified look and its own personality. It was also important to show Coupang’s aesthetic in a refined yet playful manner throughout the design, including in the selection of lighting,” stated Yoshizawa.

To deliver a bright and modern, yet functional office that reflects the brand’s personality, the team had to overcome hurdles beyond providing optimal light levels. As with many building projects in Seattle, a city with one of the tightest construction schedules in the United States, a short timeline intensified the complexity to deliver a completed space that met the client’s needs. Finding manufacturers to deliver products in the twelve-week timeframe and on budget was key to the outcome. Miller’s involvement in the early stages of the project, in addition to her strong relationship with lighting manufacturers also helped ensure the success of the project.

In order to determine the luminaires best suited for the space, the design team first studied where the space received natural light based on the sun’s path of travel throughout the day. Building on their findings, Miller was able to advise the team on various lighting solutions that could meet the needs of each area, brighten up the space, and remain on brand.

“A big part of the overall planning and design of the space was to get the lighting exactly right for the many different space types they utilize. From heads down to open collaboration, the sensitivity to the lighting and acoustical elements utilized in these locations was of great importance to the Coupang team,” stated Snook, Senior Interior Designer at JPC Architects.

“We had already discussed that we wanted to bring some circular luminaires into the space,” stated Miller. An edgy, modern, low-profile luminaire that leverages a classic circular form and incorporates edge lighting technology, Skydome® Edge® from Focal Point, had just been released to the market. Its shape, high lumen output levels, and customizable finish options along with its unlit sound-absorbing companion made it the ideal solution to deliver both visual and acoustic comfort in the open plenum areas.

“Focal Point luminaires lend themselves well to corporate interiors. When I saw the new Skydome Edge products, I knew they would fit well with the space,” continued Miller.

The design team compared the selected lighting with the sun path analysis to validate its effectiveness. While it was determined a viable option, the quantity of luminaires required exceeded the budget. Meeting budget requirements while still delivering adequate illumination required making strategic design decisions, including changing the walls and ceilings to a lighter paint color to help reflect light back into the space, thus reducing the number of luminaires needed. This strategy supported the budget requirements while also providing suitable light levels. 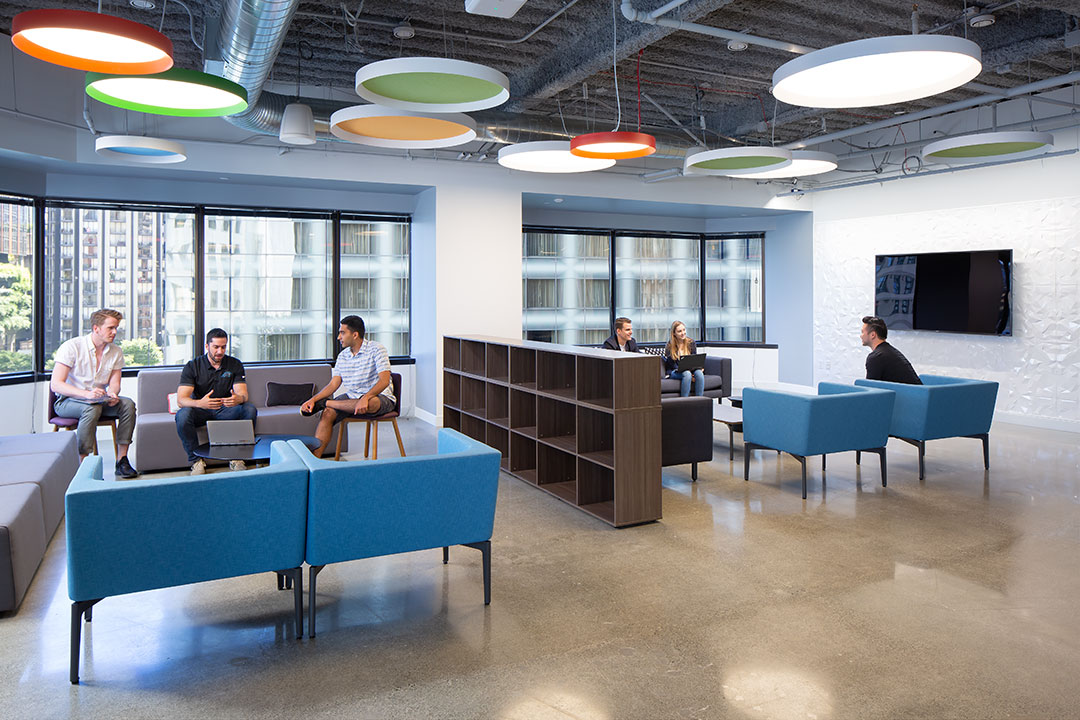 In the end, four-foot diameter Skydome Edge luminaires were suspended in the multi-use area in combination with the sound dampening companion, Skydome Edge Acoustic, delivering illumination and acoustic comfort with a coordinated look.

“We chose light fixtures that served multiple purposes, shining both up on the ceiling and down on the workstations. The light fixtures aren’t just functional, they are also decorative, serving a design and acoustical purpose. They help to mitigate sound in the open-to-structure environment,” mentioned Yoshizawa.

Although many elements that were incorporated in the design boosted the aesthetic of the space, it was the luminaire and acoustic cloud system that conveyed the brand spirit. The broad offering of acoustic material colors along with the customizable finish enabled the design team to personalize the luminaires and acoustic companions with Coupang’s corporate colors and to deliver a bold statement.

Miller added, “Skydome Edge was a great product to generally light the space, warm it up, and give some presence. It became another great way to bring in the corporate colors in a fun and playful manner.”

The Coupang Seattle office was the first installation of Skydome Edge luminaires and acoustic companions. Despite the challenge of transforming a dark open structure with limited access to natural light and a tight schedule, the project was a success, which Miller attributes to the close collaboration and synergy of JPC Architects, Focal Point, and herself. To simplify the process and ensure that the tight project timeline would be met, Miller also selected Focal Point luminaires for other areas of the office, namely Seem® 1, Zephyr®, Focus™ Wall Wash, and ID+ 3.5" Cylinders.

The incredibly creative and uniquely designed office garnered praise from Coupang. It offers a modern and bright space that supports the organization’s culture and establishes its brand on the North American continent.

Snook commented on Coupang’s use of the space, “with incredible attention to detail and thinking outside of the box, the Coupang team has embraced their space just as they hoped and have found even more value in their office environment and utilization.”