Stemming from its curriculum emerges a new dynamic learning facility

A capital campaign designed to provide state-of-the-art academic, arts, and athletic facilities helped one of Metro Atlanta’s top-ranked independent schools complete the first phase of their main campus expansion plan. The Walker School, based in Marietta, Georgia offers students from Pre-K through 12th grade an engaging educational experience to foster curiosity and gain valuable skills in an intimate and diverse community. In preparation for college and life, the school provides challenging “STEM” curricula and a unique learning style to equip students with confidence and skills outside of an academic setting.

“The new building was thoughtfully designed to reflect Walker's current programs and academic model while also creating a blueprint for the future expansion. We created numerous new spaces, from breakout and collaborative learning areas to a robotics lab, to provide Walker an opportunity to expand its curriculum,” stated Michael Mascheri Jr., Principal at Chapman Coyle Chapman & Associates Architects.

To future-proof the building and minimize the school’s environmental impact, Mascheri integrated efficient building elements such as LED lighting and multiple terraced green roofs which makes up 60% of the building’s roof. The largest terrace serves as an outdoor exploration classroom.

To address the illumination needs of the school while providing an aesthetically pleasing experience, Mascheri collaborated with Ken Langley of Conway & Owen Consulting Engineers, the electrical engineering firm for the project. One of the areas where they brought a wow factor is the three-story main lobby. 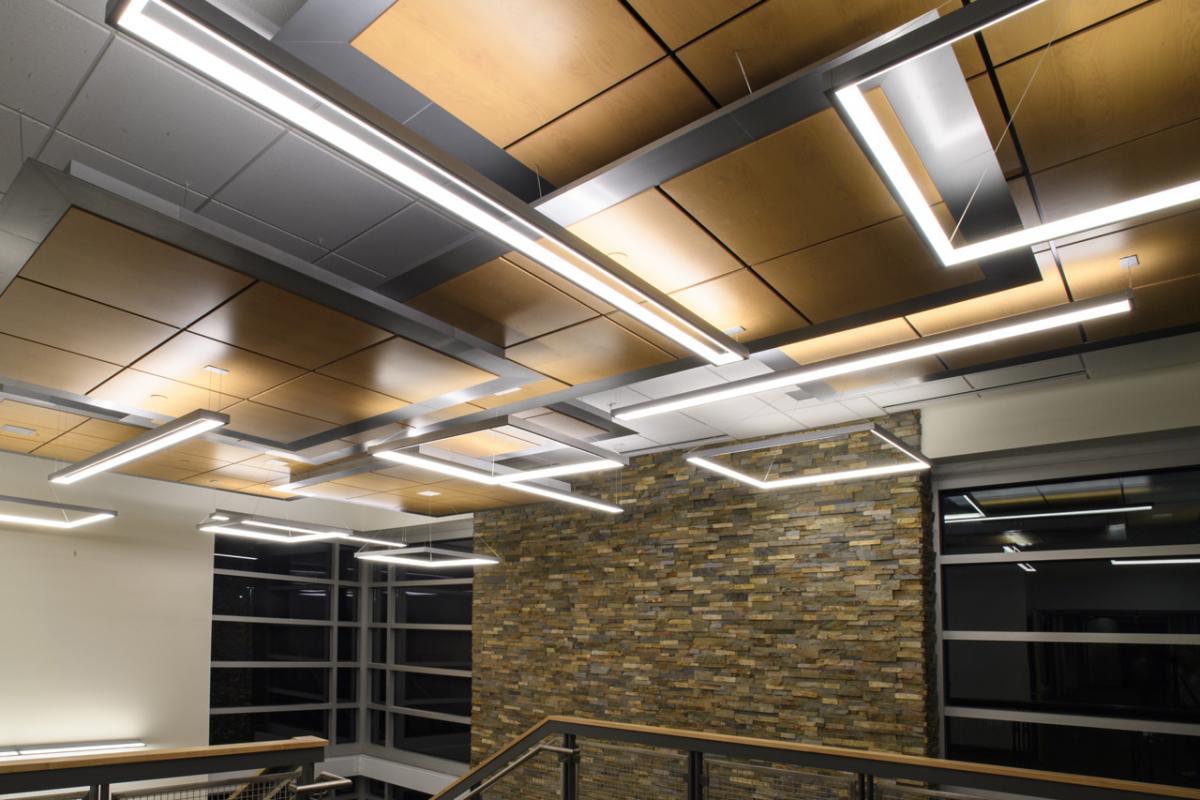 “Rather than the lighting only being a functional component and responding to a task, our goal was to have the main entrance ceiling area become a centerpiece of the space. I really wanted the light fixtures to be integral to the architecture and to define the space,” remarked Mascheri. Though an architect by trade, Mascheri also takes on the challenge of lighting design in many of his projects. “The combination of the geometric cloud component and the square and rectangular Focal Point Nera luminaires play off the architecture of the building to become an integral element and create a 3D sculpture to maximize the visual impact.”

Akin to the lobby, Mascheri and Langley continued to deliver a dynamic and visually engaging environment throughout the facility by echoing the programs offered by the school. The longtime colleagues with complementary styles, rooted in over two decades of project partnerships, selected the breakout space adjacent to the chemistry classrooms and lab to incorporate another ceiling display. The large open area gave way to designing another feature, one that would positively advance and differentiate The Walker School from the competition.

“We wanted it to reflect what was happening in that area. We came up with the idea by looking at different imagery and elements within the curriculum,” mentioned Mascheri. In the open collaboration space, they incorporated hexagonal ceiling tiles where the negative space between the tiles emulates the structure of an organic molecule or compound commonly found in the students’ chemistry courses. To emphasize the negative space, Mascheri and Langley worked closely with Focal Point’s custom engineering team to create an awe-inspiring continuous recessed luminaire that accentuates the ceiling element while also supporting the needs of the space.

Familiar with Focal Point’s standard product offering and the company’s production capabilities, Langley selected a popular Seem luminaire to create the ideal illumination in the open collaboration area. “We knew the luminaires would need to seamlessly integrate with the existing parameters of the ceiling panels. At the time, we originally looked at using Seem 4 luminaires, then Seem 2 LED was released to the market. We elected to use it because its narrow 2.5" aperture enabled improved integration with the ceiling panels,” stated Langley.

As the Focal Point team began to better understand the goal of the design, they became very involved in looking at how they could modify the existing product to create this continuous luminaire that worked together with the ceiling system.

The engineering and fabrication challenges of this complex design fueled the Focal Point engineering team. “We had not seen a design like this before, let alone with this newer product. We knew there would be challenges but the team was determined to find a solution,” recalled Alan Bond, Engineering Development Leader at Focal Point, LLC. Keeping in constant communication with Langley allowed Focal Point to ensure the desired aesthetic was achieved.

“Over the course of several months, I worked closely with the Focal Point Engineering team, going through a few iterations of how to engineer and fabricate the system,” recalled Langley.

“It was critical how this whole system would integrate when installed. The Focal Point team came up with an engineering solution of how these luminaires could be joined and mitered together to create a seamless appearance without having breaks as it made its way through the ceiling pattern,” Mascheri continued. “I don’t think the fixture would have had the same impact if we would have used individual luminaires butting up against each other. The continuous appearance of the luminaire reflects what we were trying to accomplish with the ceiling.” 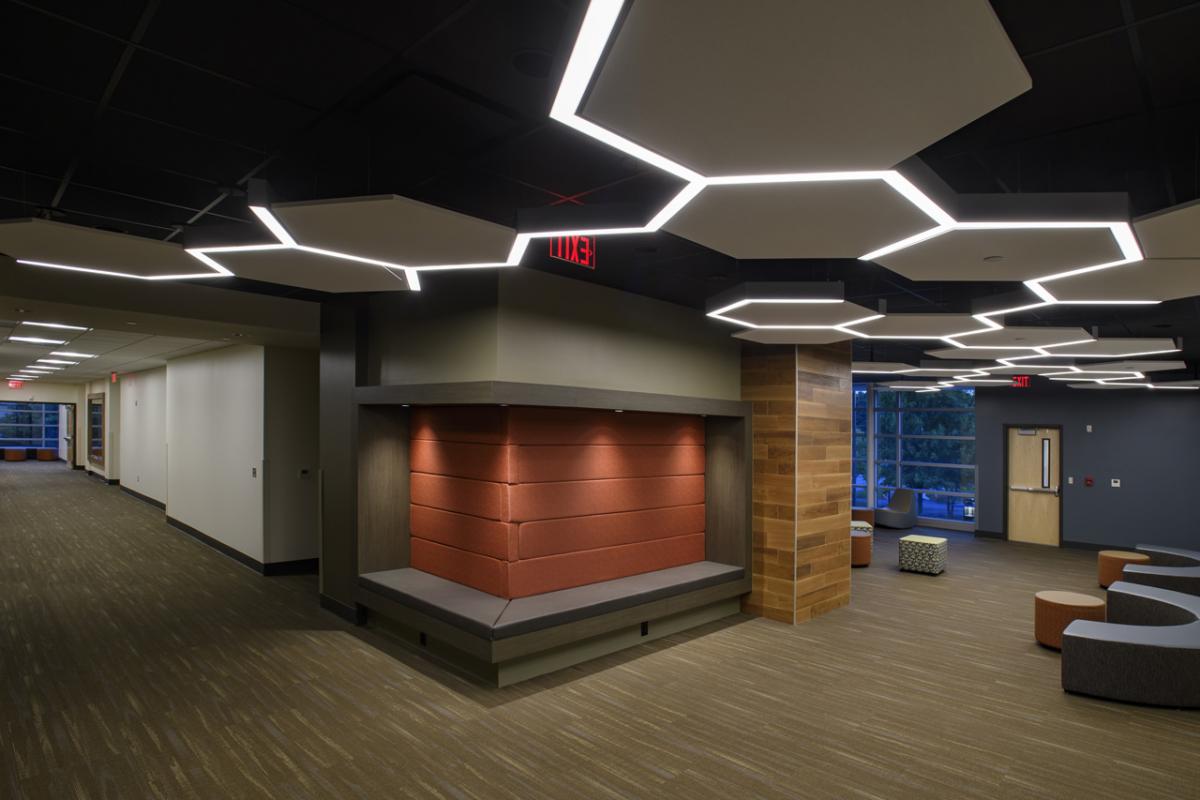 “The team’s commitment to ensuring all the particulars were covered was refreshing and ultimately enabled a seamless execution,” commented Langley. Their attention to detail allowed the Focal Point team to deliver a luminaire that impressed The Walker School leaders, parents, and students alike. “Everybody is overwhelmed by the space, and the light fixtures and ceilings in both areas are clearly the two show pieces of the building.” Continuing to reflect on the outcome and collaboration with Focal Point, Mascheri added: “We enjoyed the process and creativity with Focal Point’s engineering team. It is great to know that Focal Point has the capabilities to modify any of their luminaires to meet the design need or intent.”

Langley further emphasized the impact of the design stating: “the new science and technology focused building didn’t just resolve the need for an educational space but, it also elevated the school in a very competitive educational market.”

In the end, the new facility delivers a dynamic environment to support the best possible learning experience for the students while contributing to future growth, setting The Walker School as a benchmark for excellence.