Rich history and a cool vibe best describe Eastlake Studio’s new downtown office. The well-known, Chicago-based architecture and interior design firm, who has designed offices for notable organizations like Pandora, Kimberly-Clark, and Cision was faced with adversity when plans to convert the building that had been their long-time residence to a hotel and condos became a reality.

Eastlake Studio had been residing in the Tribune Tower, an iconic Chicago structure, for approximately three decades. The change of vocation of the tower from commercial to mixed-use residential provided the architecture firm an opportunity to address the challenges of the former office while opting to move to another historic building. The limitation of the original office were motivators for designing the new space.

According to Kevin Kamien, Principal at Eastlake Studio, the main goal of the project was to maintain the open working relationship and studio vibe, emblematic of the organization. The new office still encompasses the most beloved features of the old space – cityscape views and areas for creative production – while also delivering elements it had been missing. Employees were previously spread out across three floors and a finicky HVAC system were just a few of the limitations of the original space.

“We wanted to take the working relationships on our floors and transcribe that into a new space with natural light, keeping the views, but also giving us all the things that we were missing: meeting spaces, more collaboration rooms, and formal meeting areas,” stated Kamien. The 65,000 square-foot space reflects the company’s culture, supports its work process and serves as a showroom during client visits.

The single-floor office is divided into two suites, one occupying the north side of the space, the other one the south side. The north side suite, a section once part of the original art deco building offers views of some of Chicago’s most notable architecture, a large formal conference room and two executive suites providing a respite from the active, south side suite. The south side suite encompasses employee workstations, private phone rooms, collaboration areas, and a resource library where the design team can deliver presentations. Connecting these two areas is a long corridor with a multi-use seating area, where a feature wall prominently displays the company’s revamped logo. It is illuminated by Focal Point Seem® 4 suspended luminaires in a custom black finish which seamlessly blends with the dark open ceiling structure. Seem® 2 Asymmetric recessed luminaires were used to illumination the hallway leading into the large open work area. 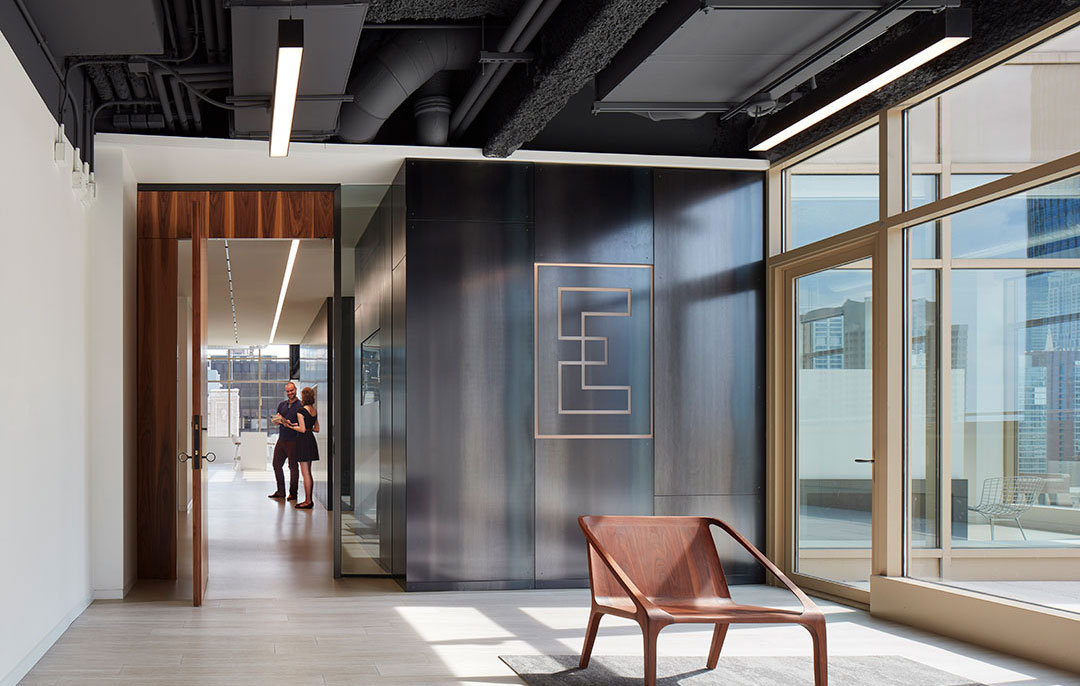 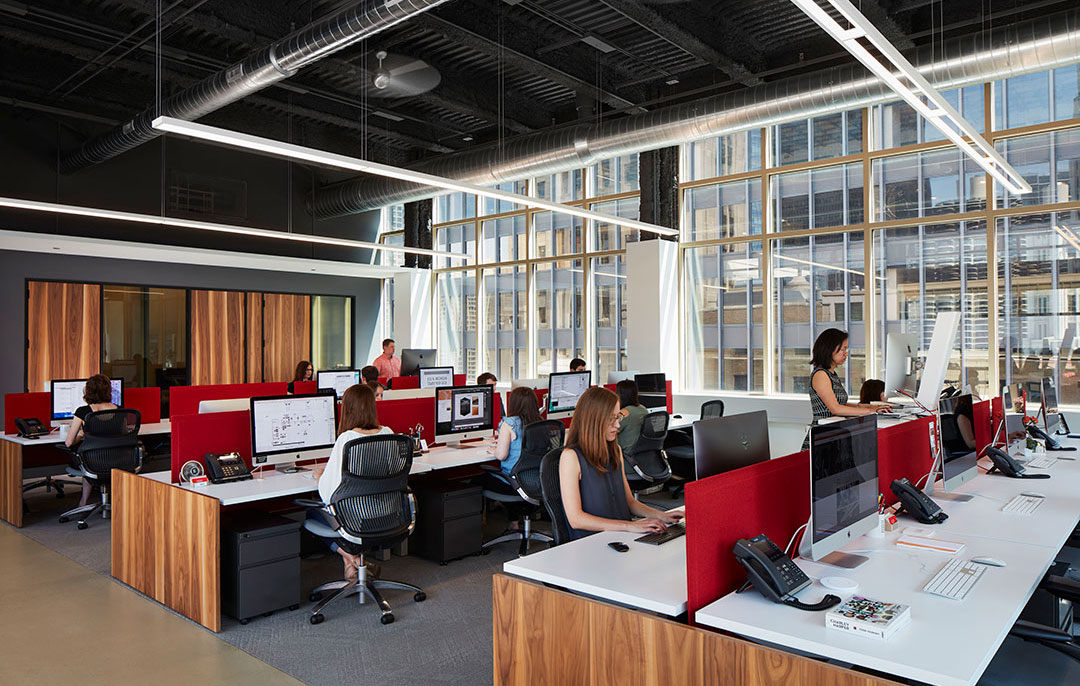 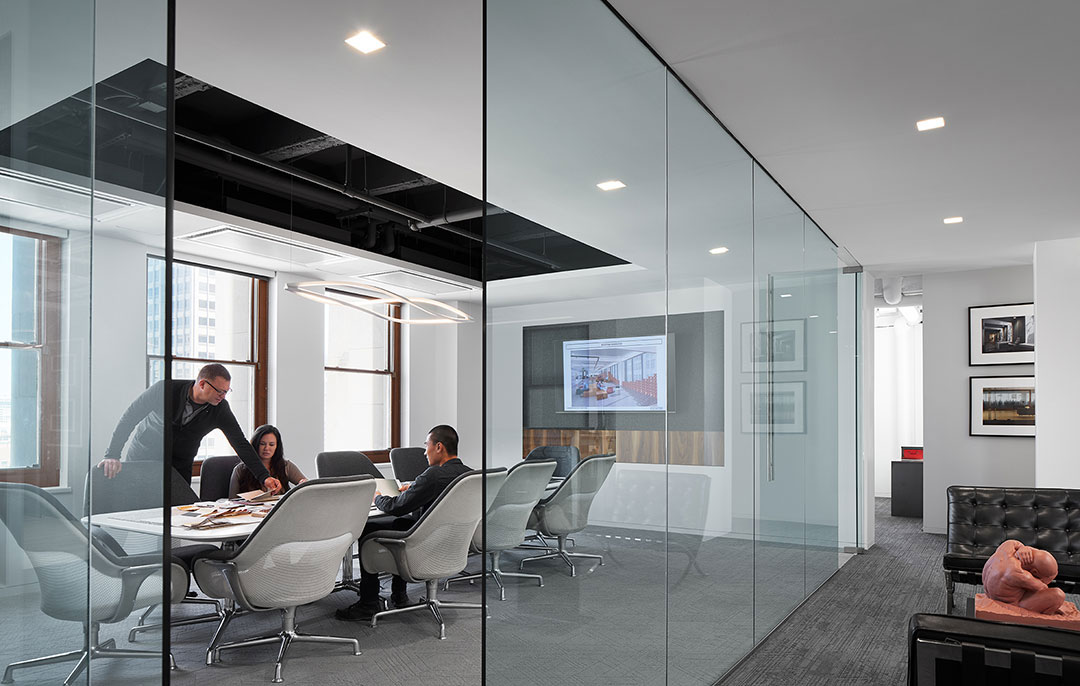 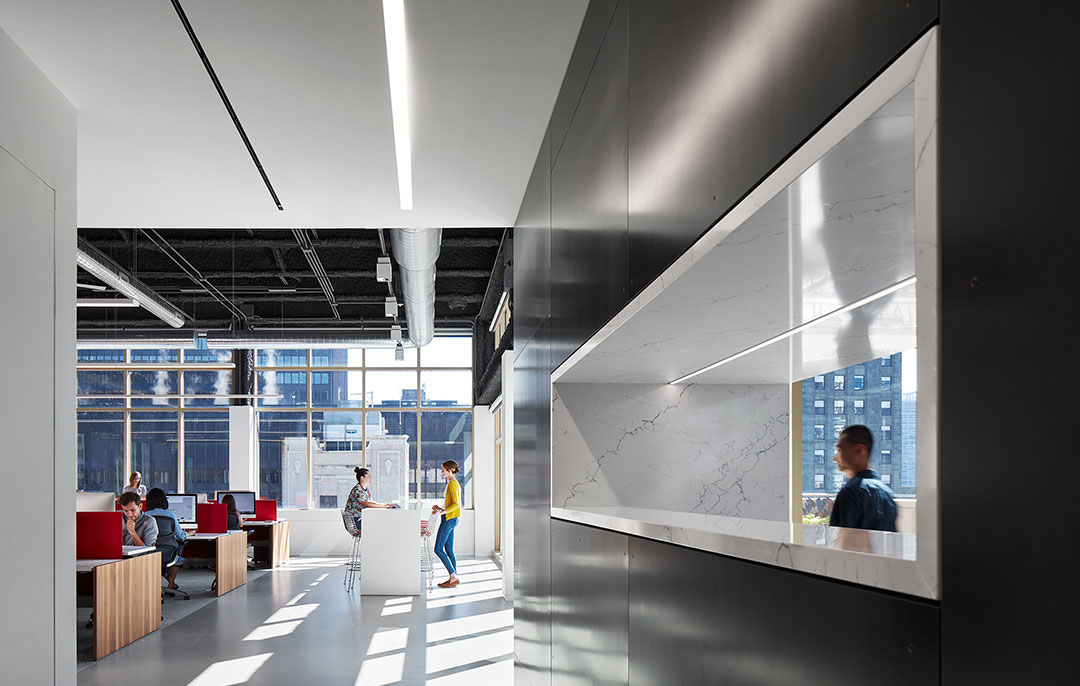 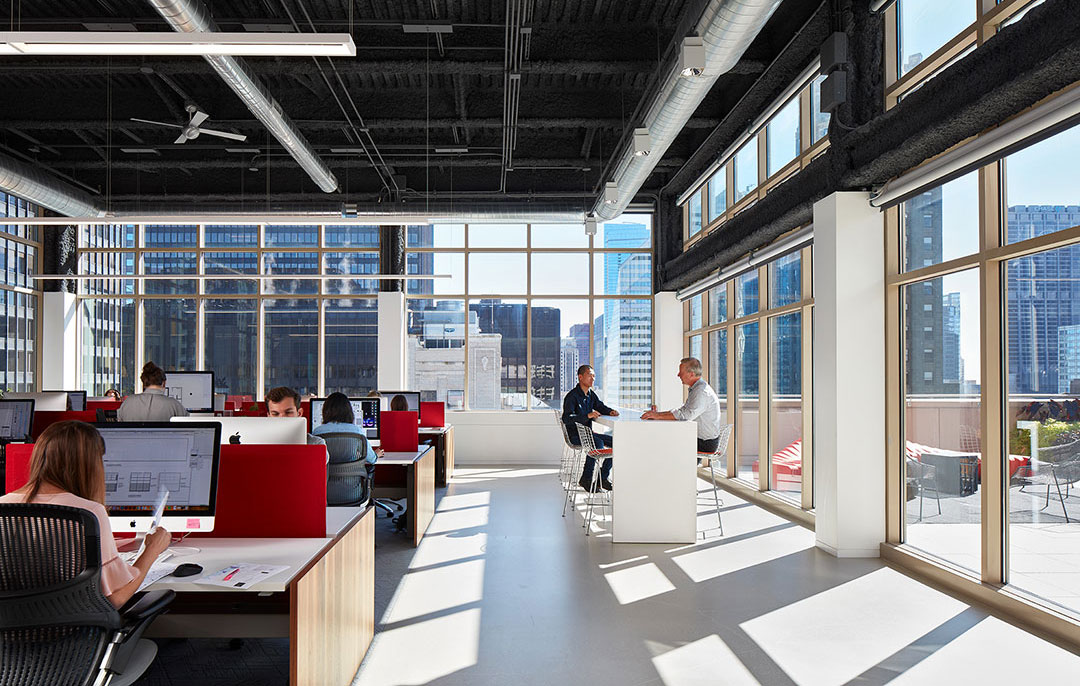 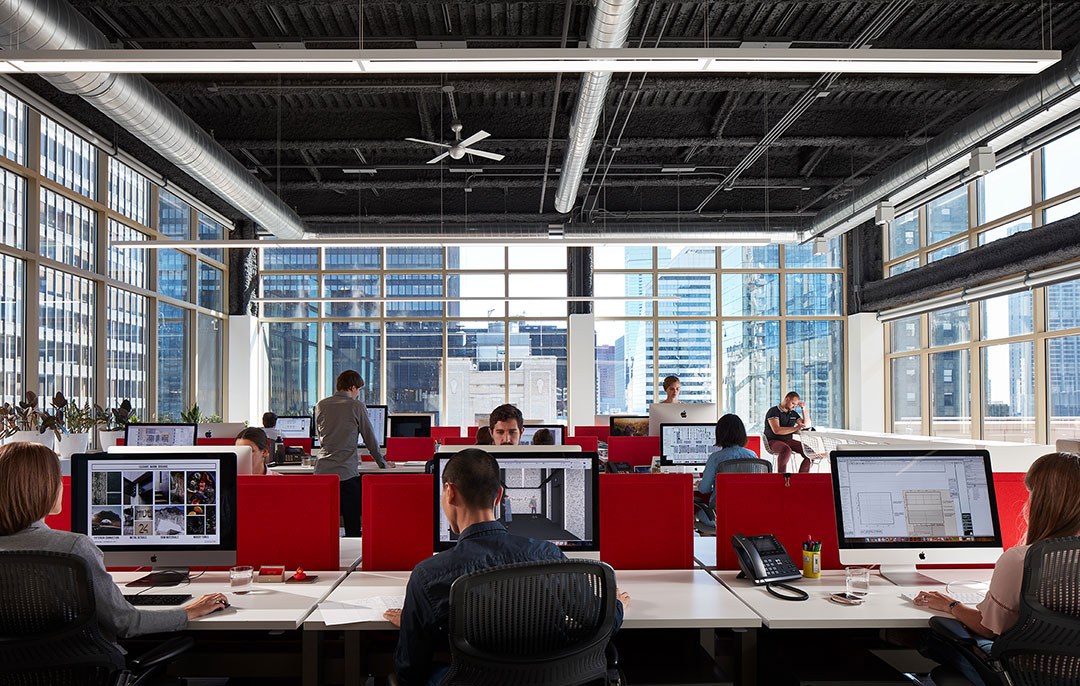 Kamien explains why the team selected the asymmetric luminaires and other products used in the project:

“We wanted to use vendors and manufacturers that we use in a lot of our projects. It was an easy path to select Focal Point and to start working with them to develop and find solutions that kept the open office area feel open. We use the Seem family of fixtures quite often, we found the asymmetric works really well for highlighting and wall washing, and that it gave out a lot of ambient light to properly light the rest of the corridor and pathway.”

With a history of designing noteworthy commercial interiors, it was no surprise Eastlake Studio knew exactly what elements to incorporate into their new office to create an elegant, modern, and collaborative environment. Kamien continued, “we were looking for lighting solutions that went with the conceptual process of the studio atmosphere, something that was elegant, and spoke to the quality of projects that we do on a daily basis.” Including products typically used in their projects gives the staff the ability to show examples of the quality and aesthetic Eastlake Studio can create and allows clients to see the products in a natural application.

To ensure the open and airy design of the workstation area was preserved, a continuous run of Focal Point Nera® linear luminaires was selected. Its modern aesthetic, unobtrusive design, center void, and Power Up™ technology elevate the look while providing optimal illumination. “Having something that we can see through, it feels elegant in the space, you don't see messy power cords, everything is run through the aircraft cables, it was critical to keep that kind of aesthetic and tone in the open spaces,” noted Kamien.

Thanks to the various distribution, configuration, and lumen output options in the Nera collection, Eastlake was also able to use individual units of Nera linear luminaires in the north side suite, offsetting the confined feeling that the lower ceilings deliver while bringing a cohesive look to the office.

The organization has been on a steady growth path for the last several years and this new space with historic roots, sitting partially over the site of Fort Dearborn, represents the brand and its future while demonstrating the quality and aesthetic the architecture and design firm can produce. 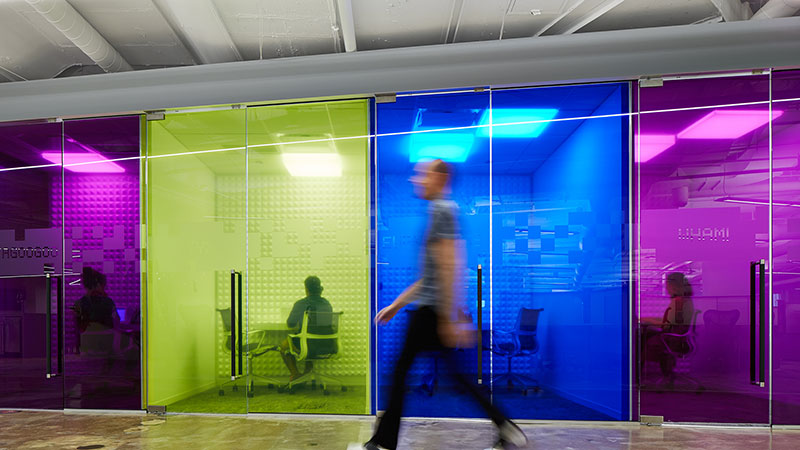 This music streaming platform’s office pays homage to the 1980’s with the use of bold colors and a light up dance floor. Connecting musicians and listeners is at the core of its business and, to celebrate some of the decade’s most iconic musicians, décor related to famous artists is incorporated in the meeting rooms. Nivo® luminaires with various pop-down lens lengths illuminate the displays while also heightening the playful aesthetic of the office. 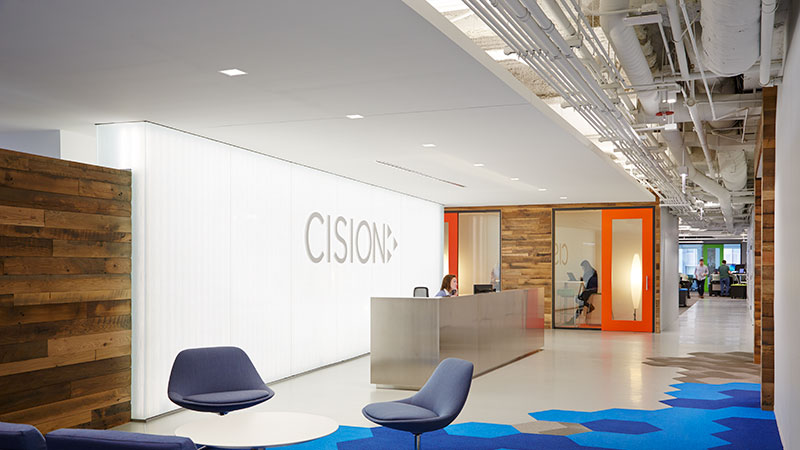 Evolution is in the DNA of this global media intelligence and software developer. It emerged from a magazine clipping service to now serve communication professionals with a comprehensive portfolio of PR, IR, social media software, analytics, and content distribution services. As the next step in a history punctuated by several acquisitions, a relocation to a new Chicago-based headquarters was seen as an opportunity to reexamine the organization. The company’s leadership wanted a space that would represent the brand and reflect their core values: work passionately, be accountable, communicate openly, drive innovation, and value people. The brand’s bold colors were incorporated in the furniture while Seem® 2 LED luminaires in a pattern configuration and custom blue finish illuminate the open office and accentuate the space.